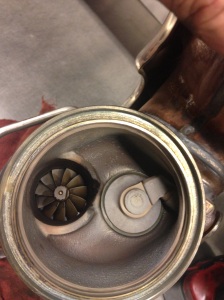 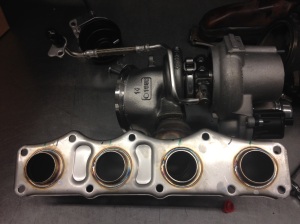 Here are pic’s of a turbo off a N20 engine,,,,the problem was during cold start there might be blue smoke coming out of the tailpipe,,,the smoke maybe a lot ,,,,,,,and very noticeable,,,,,the repair might be a new oil line that feeds the turbo,,,,the new line has a built in one-way check valve built into it,,,,the check valve stop oil from leaking into the turbo when the engine is shut off,,,sometime the problem is also the turbo seal leaking oil past the propeller ,,,,,you can noticed in the pic’s oil around the propeller,,,one of the pic’s is the new turbo,,,,,sorry I didn’t get any pic’s of the new oil line.

Like Loading...
This entry was posted in Uncategorized and tagged N20, oil line, turbo. Bookmark the permalink.