Posted on November 20, 2015 by bmwtechnician 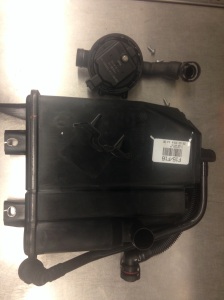 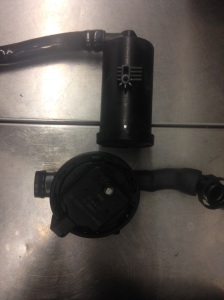 The first pic is the charcoal canister and NVLD  pressure switch,,,,the second pic is the NVLD and the filter,,,all these parts came off a F15 X5 with a N55 engine,,,,,the check engine light was on,,,,fault micro leak in gas tank emissions,,,,BMW thought the fix was a bad production run of NVLD switches,,,,,so they had us update them to the news part,,,,,but now we are finding out the new part still is not fixing the problem on some cars,,,,,,well that happen to this car,,,,the NVLD was already replaced 6 months ago,,,,,,so now BMW wants us to put a new charcoal canister with NVLD and filter,,,,hoping that will fix the problem,,,,BMW thinks the charcoal canister is getting fuel soaks causing the problem,,,,let all hope so,,,,,the problem now is BMW is back ordered on all the parts,,,,because we have to any cars with the same problem.