N55 turbo oil leak,,,this is the same turbo from a previous post,,,,the oil was leaking between the intake and exhaust side of the turbo,,,,the turbo was on back order and finally came in.

A major problem happened while replacing the turbo,,,,this is a picture of the coolant return pipe,,,the pipe was so frozen in the turbo,,,,I couldn’t remove the pipe,,,,,as you can see I pried off the hold down for the pipe,,,,so I had to cut the pipe off so I could remove the turbo. 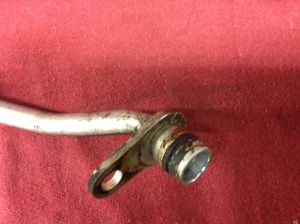 Here a picture of the turbo coolant feed pipe,,,,this one I was albe to remove,,,,,but you can see all the corrosion around the o-ring,,,,I recommend replacing both those coolant pipe while replacing the turbo.

Like Loading...
This entry was posted in Uncategorized and tagged coolant pipe, N55 turbo. Bookmark the permalink.