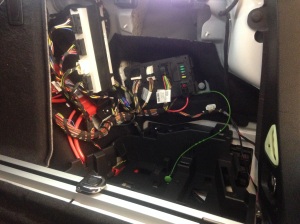 The black control unit in the middle is the REM  module,,,Rear Electronic Module,,,this was on a 2015 328gt,,,,the REM controls all the electrical in the rear of the car,,,,tail lights, fuel sender, all the window and rear door locks,,,,customer said the rear tail lights were inop and check engine light was on,,,,checked faults found all rear lights were inop,,,and for the check engine light,,,,there were no engine faults,,,,but there were fuel sender faults for both fuel sensor,,,,that’s what caused the check engine light,,,,while I was checking the faults the REM was died,,,I couldn’t communicate with the module,,,,I did unplug all the connectors and waited 5 minutes,,,,,and reconnected and the module came back to life. 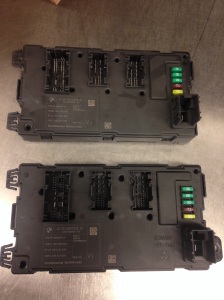 Here the old one on top and new one on the bottom,,,I like to match them up to make sure I got the right one,,,even though the old one started to work,,,,I decided to replace it so the customer wouldn’t have the same problem,,,replacing it was easy,,,it was just in the right rear storage compartment panel,,,you have to program and code this module.

Like Loading...
This entry was posted in Uncategorized and tagged 328gt, died, inop, REM module. Bookmark the permalink.