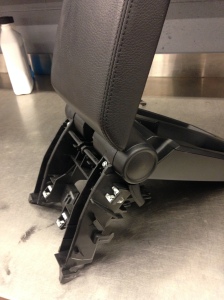 Here the whole center consul removed from the car. 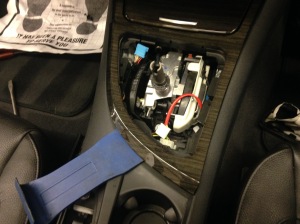 This is a little side cover on the passengers side,,,,just pop this off and remove the screw behind it.

Under the arm rest is another cover pop it off and remove 10mm head bolt,,,,also pop out the aux panel and unplug,,,I forgot about pictures for rear of center consul panel,,,just pop it off and remove the 2 10mm head nuts and also unplug cig lighter.,,,you will have to remove e-brake boot cover and put E-brake in service mode so the e-brake handle can be pulled up higher so you can remove the center consul.

Ok this is a picture of the rear of the new arm rest,,,,there are 2 torque screws that have to removed so the arm rest will pull away from the center consul,,,,don’t remove the screw shown the screw will be where that hole is deep inside the arm rest.